The Mekong River is the 5th longest river in the world which starts flowing from Tibet region across six territory states including China, Laos PDR, Myanmar, Thailand, Cambodia, and Vietnam. Historically, Mekong river plays an important role in the development of the region in many sectors, namely cruise road for transportation, tourism field, fertilizer for farming, fisheries, hydropower, and it is believed to be the second most bio-diverse river in the world after the Amazon. 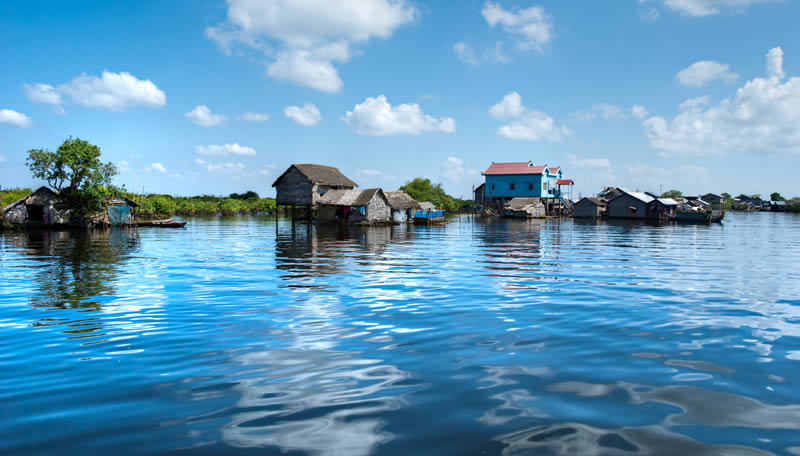 The river system plays a crucial role for shipping fish products. Particularly, due to fishing is the main source of livelihood for locals which makes this river one of the busiest silk road, people use this river as a major way to transport their products from one place to another, as well as to the markets. Tonlé Sap, the Great lake, located in Cambodia, is well-known as Lower Mekong Basin has provided a large proportion of floodplain, wetlands, flooded forest, and deciduous forest that consists of homes for distinct species to breed and provides a rich soil for farming as well. Beside this, tourism has one of the most important sectors of Cambodia's economy. In 2013, tourist arrivals increased by 17.5 percent year, with business travellers increasing by 47 percent. (Calderon, Justin 2013). Kompong Phluk community that is well-known as the floating community in Siem Reap recently became a hot spot for visitors after Angkor Wat. The floating community that is composed of five villages and settled by around 800 families receives more than 20,000 tourists each year. (Muth 2017) Tourist visit this community to see the Prek Toal bird sanctuary protected area, to learn about how people live and work on the water, and some people also create projects to help this community.

In 2015, the poverty reduction decreased to 19.5%. (Prak 2017) But despite the fact that the poverty has rapidly decreased, the proportion of the employed population is still below 1.90$ Purchasing Power Parity a day 33.6%. (ADB 2017). The majority of Cambodians are farmers, who are mostly poor and unable to support their own families as they are always plagued by floods during the rainy season, are located mostly in flat areas of the country where the rich fertilized soil can be found. Basically, each family depends on agriculture to gain income. Due to the lack of opportunities, some Cambodian decide to migrate to other countries to seek jobs to support their families, and some them work in the domestic garment factories. Similarly, a huge proportion of people from Kompong Phluk community depends on fishing and guiding tourists as a source of income and that each family only make about 2$ per day.