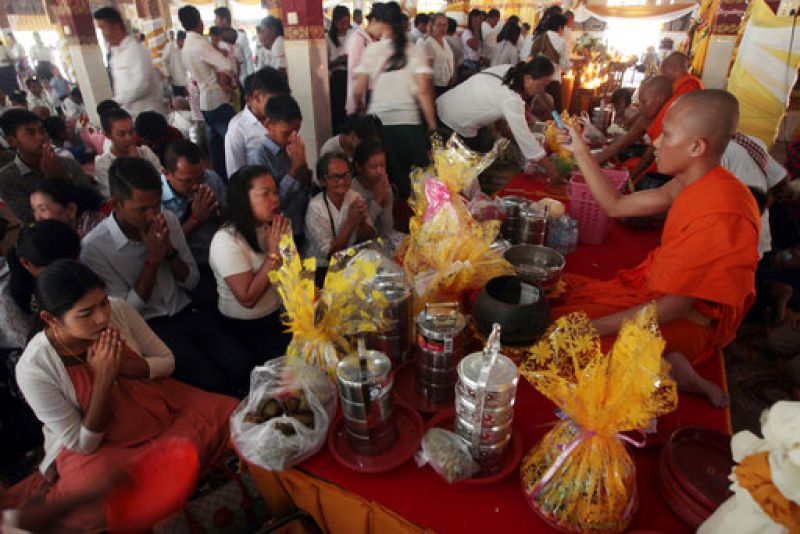 What does Pchum Ben Festival mean in Buddhism? In the Khmer language, Pchum or means “a meeting or gathering”. Ben means “a ball of something”, such as rice or meat. The Pchum Ben festival originated in the Angkorian era when people followed animism, before Brahma or Buddhism.

Both Buddhism and animism reflect Khmer respect and remembrance for their ancestors.
Pchum Ben is also a convenient way for Buddhist monks to receive food during the heaviest part of the rainy season while they stay in the pagodas to follow their moral principles.

Celebrations
The first 14 days of the Khmer month Pheakta Bot are called Kan Ben (“observed celebration”). The 15th day is called Ben or Pchum Ben Day. During Kan Ben, people give Buddhist monks gifts of food and candles. At night Buddhist monks recite a protective prayer. Cambodian artists play traditional music such as and . Pchum Ben Day is the biggest celebration. Villagers come from all around to prepare the pagoda of their village the night before the celebration. Pchum Ben is when the villagers gather to celebrate in their villages.

Scriptures
The scriptures relating to the festival are complex, but the first scripture involves the five Buddhas negotiating with hungry ghosts. In the second scripture, from Pet Vuto (Monks’ Governor), the King’s servants and soldiers were commanded to make war. On the ship at night, they met ghosts who were hungry. The servants and soldiers asked: “How can we get food to you?” The ghosts said: “You can offer the food to the person among you who has the five moral conducts or eight moral conducts, and invoke our names.” The third and fourth scriptures say that in the first 15 days of Pheakta Both, the heaviest rainy period, the devil releases the ghosts to find their relatives to receive food.

Balls of rice or Bay Ben
Bay ben (balls of rice) are offered to ghosts at dawn. People believe ghosts with heavy sins cannot receive food during the day. Bay ben is made from sticky rice and sesame. Sometimes people add coconut cream to make it more delicious.